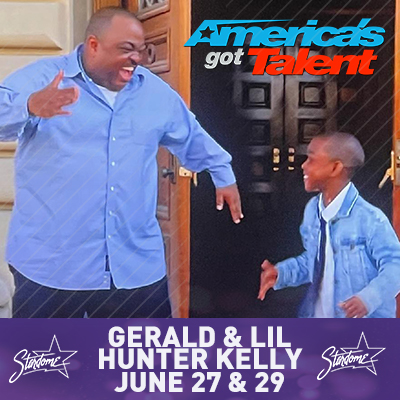 Atlanta stand-up comic Gerald Kelly, 53, has been a club headliner for many years but has yet to get that big break that could propel him into a national spotlight.

HIs appearance on Monday’s “America’s Got Talent” on NBC may have changed that in part because he did a dueling stand-up set with his seven-year-old son Hunter.

The unusual combo delighted the judges. Gerald’s set focused on the difficulties of parenting, covering familiar ground like homework and raising boys vs. girls. The judges gave him a mostly solid review, not knowing what was coming next.

Howie Mandel, a stand-up comic himself, said Gerald is really likable, with good timing and stage presence. “I didn’t love the material as much as I love you,” he said. Heidi Klum, who has kids, found his material relatable. Simon Cowell said it started well but didn’t have a “dynamic end.” Still, Cowell said he laughed a lot and felt like the audience at home will like him.

Gerald got four yesses and made it to the next round.