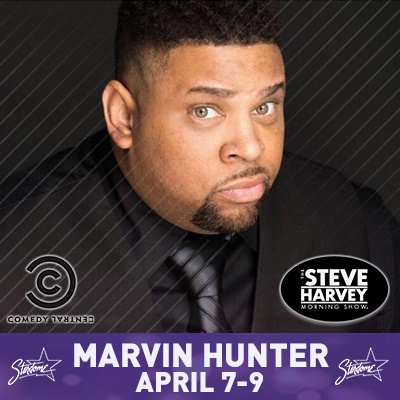 Having traveled both internationally and throughout the United States, sharing the stage with the countless veteran comedians such as Rickey Smiley, Mike Epps, Nephew Tommy, Rodney Perry, Michael Blackston, Corey Holcomb, Aries Spears and Damon Williams to name a few, Marvin’s brilliant comedic aptitudes has earned him numerous awards. Among them are 2003 1st place winner of the All-Star Hawaii Comedy Competition in Honolulu, HI; 2008 1st place winner of the Charleston Comedy Festival Stand Up Competition in Charleston, SC; and 2010 Top 5 Finalist in the Nephew Tommy’s 50 Comics Deep Competition in Columbia, SC.

Marvin Hunter is indeed “The Only One doing it today” and is a bona fide must see!